Congestion Control and its prevention policies

Factors that Causes the Congestion: 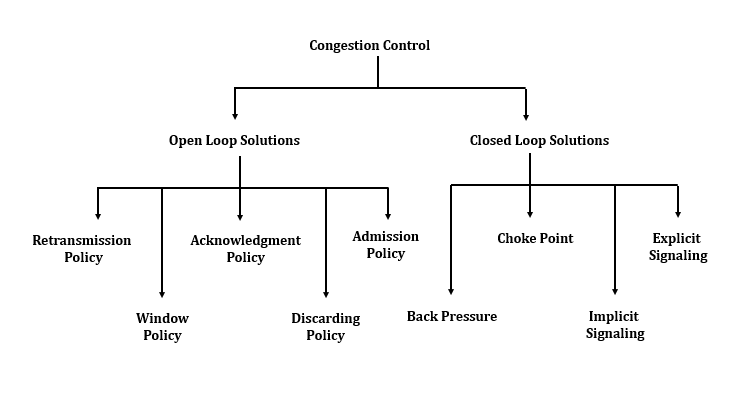  In Open Loop Congestion Control, policies are used to prevent the congestion before it happens.

 Congestion control is handled either by the source or by the destination.

 It uses some kind of feedback.

 The sender retransmits a packet, if it feels that the packet it has sent is lost or corrupted.

 However retransmission increases the congestion in the network.

 But we need to implement good retransmission policy to prevent congestion.

 Selective Reject method is preferred over Go-back-n window as in Go-back-n method, when timer for a packet times out, several packets are resent, although some may have arrived safely at the receiver.

 The acknowledgement policy imposed by the receiver may also affect congestion.

 If the receiver does not acknowledge every packet it receives it may slow down the sender and help prevent congestion.

 Acknowledgments also add to the traffic load on the network.

 Thus, by sending fewer acknowledgements we can reduce load on the network.

 To implement it, several approaches can be used:

 A receiver may send an acknowledgement only if it has a packet to be sent.

 A receiver may send an acknowledgement when a timer expires.

 A receiver may also decide to acknowledge only N packets at a time.

 A router may discard less sensitive packets when congestion is likely to happen.

 Such a discarding policy may prevent congestion and at the same time may not harm the integrity of the transmission.

 An admission policy, which is a quality-of-service mechanism, can also prevent congestion in virtual circuit networks.

 Switches in a flow, first check the resource requirement of a flow before admitting it to the network.

 A router can deny establishing a virtual circuit connection if there is congestion in the network or if there is a possibility of future congestion.